What to see in Orvieto

Home/Uncategorized/What to see in Orvieto
Previous Next

What to see in Orvieto 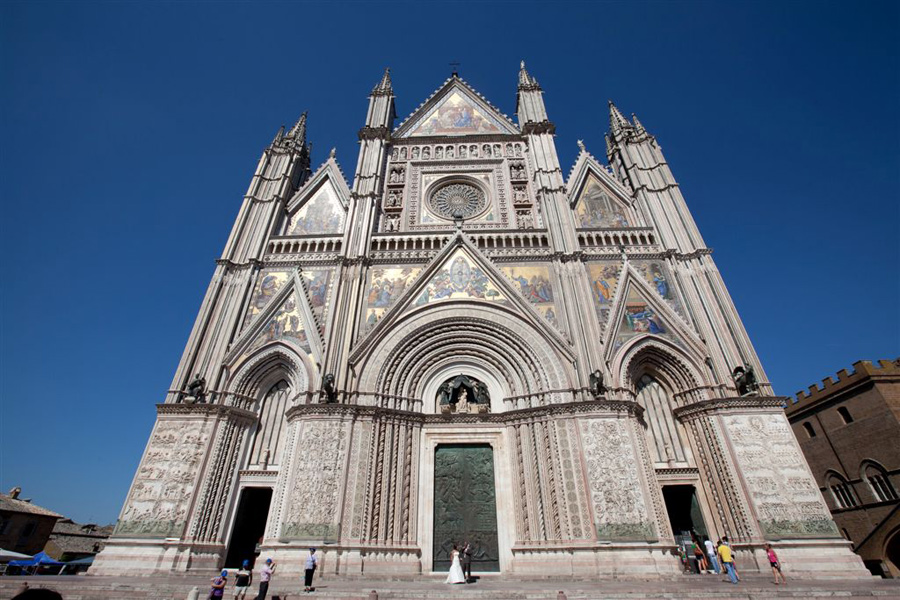 Orvieto Cathedral (Italian: Duomo di Orvieto; Cattedrale di Santa Maria Assunta) is a large 14th-century Roman Catholic cathedral dedicated to the Assumption of the Virgin Mary and situated in the town of Orvieto in Umbria, central Italy. Since 1986, the cathedral in Orvieto has been the episcopal seat of the former Diocese of Todi as well. The building was constructed under the orders of Pope Urban IV to commemorate and provide a suitable home for the Corporal of Bolsena, the relic of miracle which is said to have occurred in 1263 in the nearby town of Bolsena, when a traveling priest who had doubts about the truth of transubstantiation found that his Host was bleeding so much that it stained the altar cloth. The cloth is now stored in the Chapel of the Corporal inside the cathedral.

Situated in a position dominating the town of Orvieto which sits perched on a volcanic plug, the cathedral’s façade is a classic piece of religious construction, containing elements of design from the 14th to the 20th century, with a large rose window, golden mosaics and three huge bronze doors, while inside resides two frescoed chapels decorated by some of the best Italian painters of the period with images of Judgment Day. The cathedral has five bells, dating back to Renaissance, tuned in E flat. Source Wikipedia 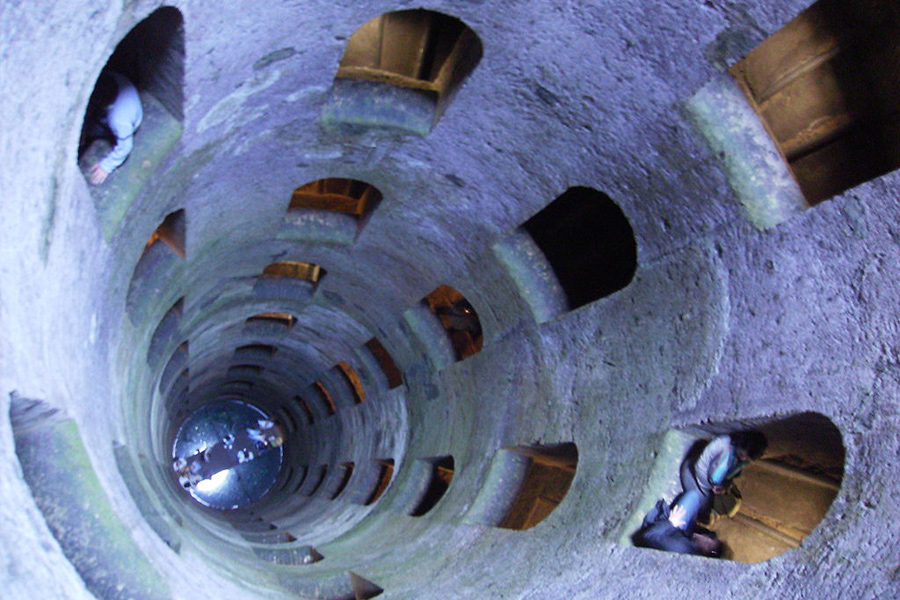 The Pozzo di San Patrizio (English: “St. Patrick’s Well”) is a historic well in Orvieto, Umbria, central Italy. It was built by architect-engineer Antonio da Sangallo the Younger of Florence, between 1527 and 1537, at the behest of Pope Clement VII who had taken refuge at Orvieto during the sack of Rome in 1527 by the Holy Roman Emperor Charles V, and feared that the city’s water supply would be insufficient in the event of a siege. The well was completed in 1537 during the papacy of Pope Paul III. The name was inspired by medieval legends that St. Patrick’s Purgatory in Ireland gave access down to Purgatory, indicating something very deep. The architect-engineer Antonio da Sangallo the Younger surrounded the central well shaft with two helical ramps in a double helix, accessed by two doors, which allowed mules to carry empty and full water vessels separately in downward and upward directions without obstruction. The cylindrical well is 53.15 metres (174.4 ft) deep with a base diameter of 13 metres (43 ft). There are 248 steps and 70 windows provide illumination.[1] 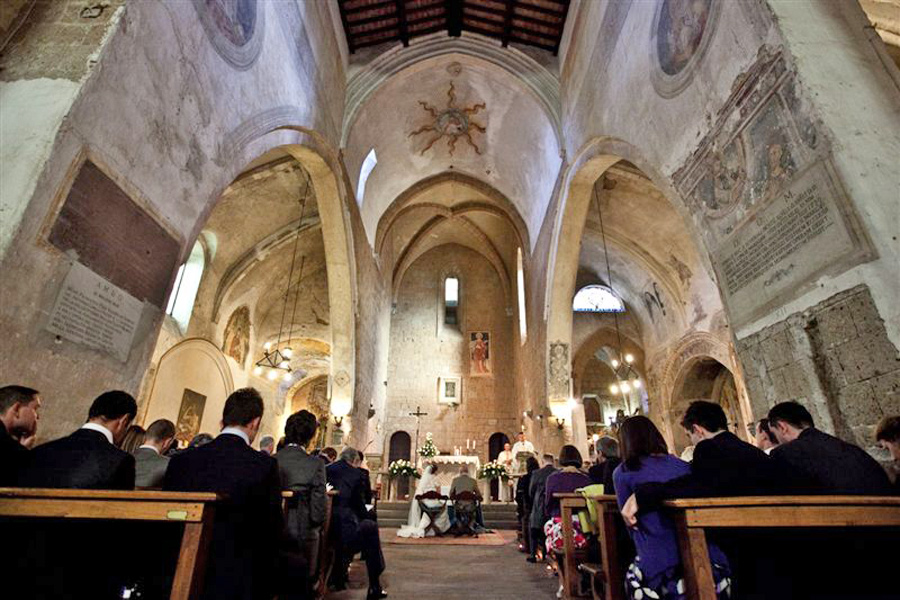 Chiesa di San Giovenale is a church in Orvieto, Umbria, Italy. Initially constructed in 1004, it contains frescos and artefacts from the 12th and 13th centuries. It belongs to the Roman Catholic Diocese of Orvieto-Todi. The church was built in 1004, possibly on the site of an Etruscan temple dedicated to Jupiter. There was an early Christian church on the site, probably from the 6th century, also dedicated to San Giovenale. It stood next to another religious building dedicated to San Savino, the only record of which is contained in a fresco by Ugolino di Prete Ilario in Orvieto Cathedral.[3] The present church was built in 1004 with the support of several rich families in the area and was documented as a parish church in 1028. An inscription on the high altar (GUIDO ABAS MCLXX) indicates that by 1170 it belonged to the order of monks known as Ordine Guglielmino. When the monks left in c. 1248, it again became a parish church. On being reconsecrated by Bishop Giuseppe Marsciano in 1739, it fell under Sant’ Agostino until 1810 when it came under the Franciscans. The church was initially constructed in the Romanesque style. A tall bell tower stands on the side of the bare facade. The semi-circular apse was removed when, in the 14th century, extensions at the eastern end in the Gothic style terminated in a rectangular apse. There are still traces of the Romanesque porch and the blind arches of the period. An inscription on the lateral door gives its date of construction as 1497. Source Wikipedia 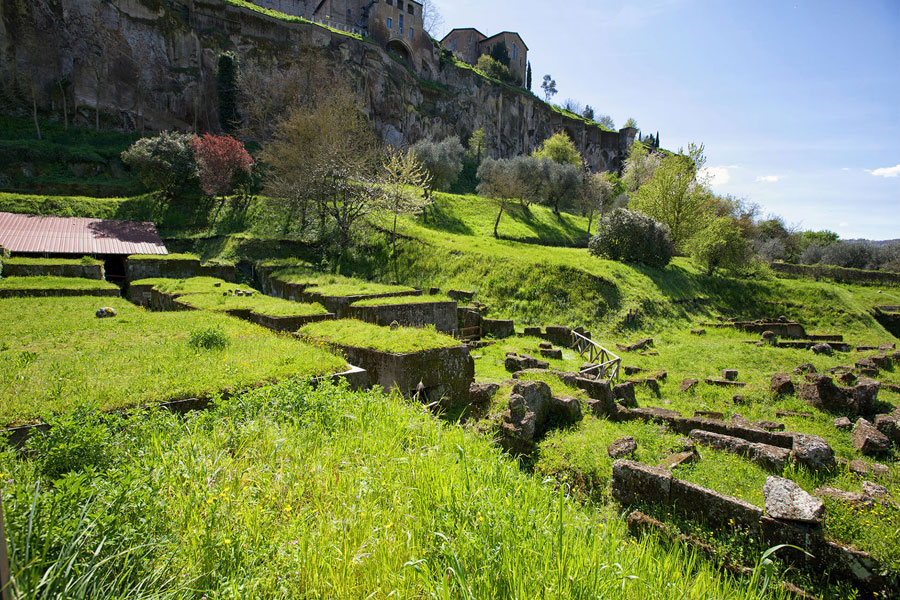 Etruscan Era: the ancient city (urbs vetus in Latin, whence “Orvieto”), populated since Etruscan times, has usually been associated with Etruscan Velzna, but some modern scholars differ. Orvieto was certainly a major centre of Etruscan civilization; the archaeological museum (Museo Claudio Faina e Museo Civico) houses some of the Etruscan artifacts that have been recovered in the immediate area. An interesting artefact that might show the complexity of ethnic relations in ancient Italy and how such relations could be peaceful is the inscription on a tomb in the Orvieto Cannicella necropolis: mi aviles katacinas, “I am of Avile Katacina”, with an Etruscan-Latin first name (Aulus) and a family name that is believed to be of Celtic (“Catacos”) origin. Source Wikipedia  Photo: Umbriaturism

About the Author: Editore